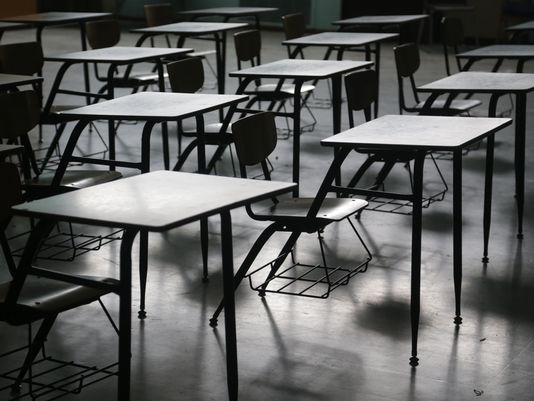 Governor Gretchen Whitmer last week wielded her veto pen as a vicious weapon against kids in Detroit and the public school teachers who dedicate their lives to educate them.

The Governor last Monday callously slashed $240 in annual per-pupil funding for the majority of students in the City of Detroit, and in public schools that disproportionately serve minority students and students from low-income families.

While Whitmer was taking money from public schools and public school teachers serving kids in some of the hardest-to-reach neighborhoods in the state, she signed a budget boosting funding for wealthy suburban schools. It was a deeply personal and troubling attack on many of the Michigan children who need help the most.

We’re not taking this attack lying down. Instead, we’re standing up for Michigan public school students. We hope you’ll join us.

Detroit News:Editorial: Budget ‘Mess’ is of Whitmer’s Own Making

“For the budget items she vetoed, Whitmer will have to resume negotiations with lawmakers on how to reallocate that money. She also will need the Legislature if she hopes to put in place a long-term plan to finance accelerated road work

“The hostility she’s generated with her petulant approach to the budget process makes both tasks more difficult.”
Capitol Confidential:Whitmer Vetoes Funding Hike for Schools that Enroll More Poor Kids
“According to state data, 75% of Michigan charter school students are eligible for free or reduced lunches, and so are deemed “at risk” students. In contrast, just 47% of the students enrolled in conventional district schools are in that category.”

“Governor Whitmer wielded her veto pen as a vicious weapon against kids in Detroit and the public school teachers who dedicate their lives to educate them,” said GLEP Executive Director Beth DeShone. “There’s no need to mince words. The Governor has callously and specifically attacked minority students, learners from low-income families, and public school kids in Detroit and urban neighborhoods.”

It was a devastating attack on roughly 150,000 Michigan public school students.

Whitmer’s cut will disproportionately hurt those who need it most.

Her attack on minority students and their public school teachers came early last week through a line item veto of K-12 per pupil funding for public school students.

Every child deserves a high quality education, regardless of his or her zip code, and students from low-income families deserve as much help as anyone. The Governor is wrong to penalize public school students and their public school teachers.

Call Governor Whitmer today at (517) 335-7858 to demand she reverse course on her devastating cut to Michigan’s public schools.
If you, a friend, student, or loved-one would like more information on how to get involved at the state Capital, please contact Beth DeShone at [email protected].