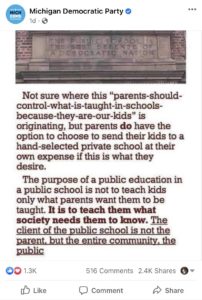 The Michigan Democratic Party might not get it, but no one knows what a child needs most like his or her parents.

That’s why it was so astonishing just days ago when Democrats went online with a formal statement telling parents they didn’t deserve a say in what happens inside their kids’ schools.  Parents aren’t the client of the schools, they said.  Neither are kids.  It’s “society,” and it’s up to them to decide what matters.

If parents want a say, Democrats said, they can go pay for a private school education.  If they can’t afford it?  Tough luck.

Where was Gretchen Whitmer?  On the sideline counting campaign cash from her donors in the teachers unions and public school bureaucracy.

The Democratic Party’s post on social media drew thousands of heated comments from parents outraged at Democrats’ claim that parents deserve less say in public education.  They’ve implored the Governor to stand up for their kids and their rights.  The Governor hasn’t said a word.

Michigan students’ exploding academic and mental health crises are only deepening. Instead of a helping hand, the Governor and her party have declared war on parents.

Students in cities like Detroit and Flint remain locked out of their classrooms. Still Gretchen Whitmer remains on the sidelines.

To this governor and her political allies, schools aren’t about teaching kids – they’re about political power.

The Party’s elitist attack on low-income and other parents was absolutely astonishing – and very telling. Public school is about kids, not Democrats’ political policy agenda. Parents are demanding Gretchen Whitmer and other key elected Democrats reject this educational extremism and hold their party accountable.

So far, they’ve been just as disappointed as they were when the original post went up.

Every day she stays on the sidelines students fall farther and desperately behind.

Our annual National School Choice Week event will be held inside the state Capitol and it’s a fantastic opportunity for parents, students, teachers and advocates to connect with elected officials, with policymakers, and to stand up for their kids.

The event will feature presentations from parents, from students, and from teachers.

You can RSVP today through this link: https://bit.ly/NSCW2022